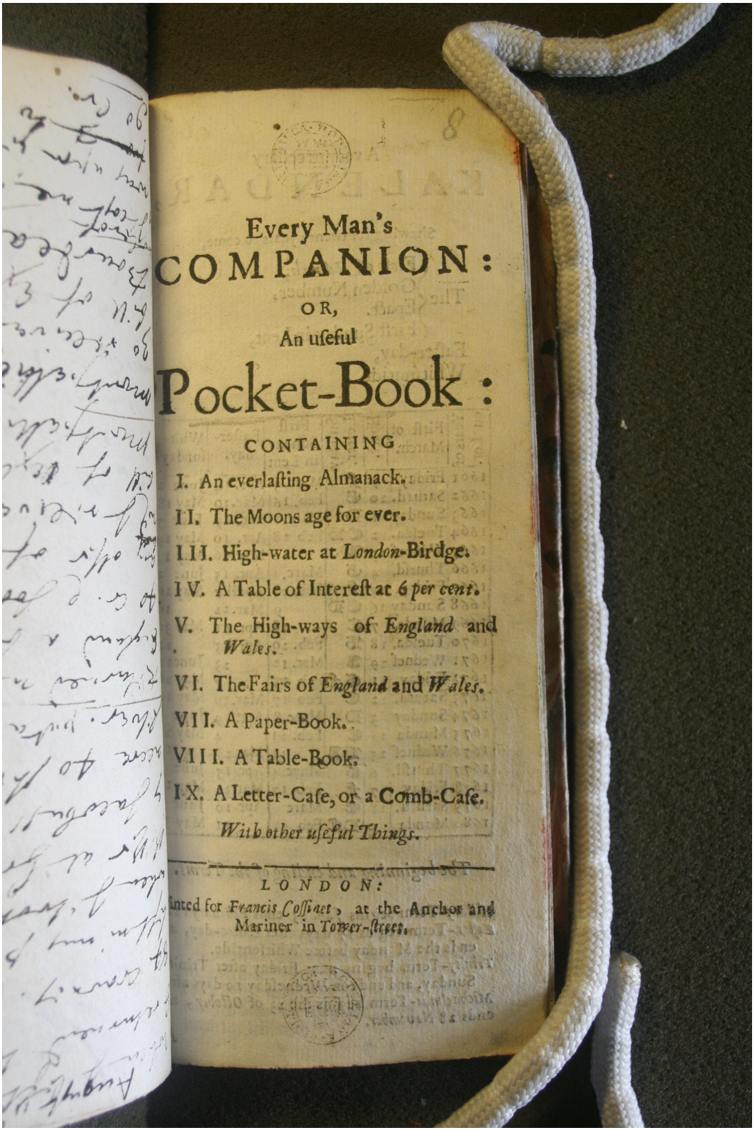 Every Man’s Companion is a bound pocket book of seven octavo paper quires, the second quire being printed. The volume has a mid-brown tanned sheep leather inboard binding. At the fore-edge it is only turned-in over the outer board layer thus forming a pocket between the two boards, the ‘letter-case, or a comb case’. 1.

When first bound the volume would have comprised 56 leaves; 8 printed and 48 blank. The book now has 50 foliated leaves and torn stubs for the missing leaves, one printed and five blank. All the blank leaves are a fairly heavy writing paper (approx 0.152-0.178 mm. thick) and the printed leaves are a thinner paper (approx. 0.102-0.139 mm.). The stubs from the missing blank leaves show that they are the same paper stock and were not prepared table-book leaves, whose erasable surface was made from a mixture of gesso and glue, allowing one to write on it with soft metal, graphite or ink. 2

Although there were no prepared table-book leaves, the editor of the almanac did explain how to erase one’s mistakes: Having a black-Lead-Pencil, write therewith upon fine white Paper (as with Ink) what you please; and when you would take it off again, (as from a Table-Book) take a piece of new bread, and rub upon the writing, and it will take it clean off, so that you may write any thing there again. Perhaps to some this may seem idle and ridiculous: but it may easily be experimented, to satisfaction. Keep a Black-Lead-Pencil in your Book, and it will always be ready for Memorandums.

Graphite pencils would still be relatively new in the seventeenth century and another form of erasable writing. As neither the pencil nor the tables were provided, Lister had to make do with a blotchy quill pen.

The earliest example of an erasable table book dated from Antwerp in 1527, and they were mass-produced in London by the end of the sixteenth century. Table books even featured in Shakespeare. Hamlet when having seen his father’s ghost: ‘Remember thee? Yes, from the Table of my Memory, Ile wipe away all triviall fond Records‘. ‘Hamlet imagines his memory as an erasable table book that can be wiped clean,’ a Lockean tabula rasa. 3

For Martin Lister, the pocketbook served a much different purpose, as a memoir of his experiences, a list of the books that he read—his Lectiones Achévees—whilst in Montpellier and a small commonplace book to record details of botany, zoology, and the descriptions of crafts and techniques to ‘put Nature to various uses’. His dedication to note-taking was typical of early modern physicians and natural historians. Due to the vast and varied nature of particular observations that characterised the realm of physic and natural history ‘lost notes meant lost information’. 4

Posted by Martin Lister on August 11

left the house August 11th, 1663 1 on board the Matthew a Yarmouth brig bound for Bordeaux 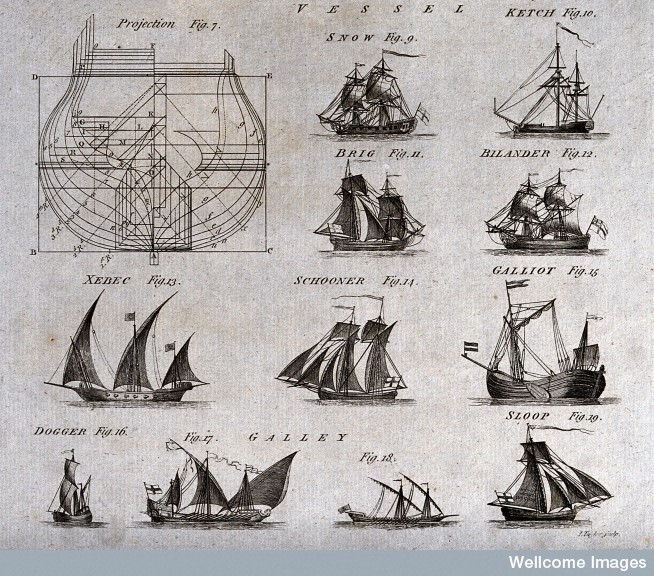 Posted by Martin Lister on August 20

Posted by Martin Lister on August 22

Posted by Martin Lister on August 24

On folio 16 of the pocketbook, Lister later noted:

The beech I saw at Deale I tooke not much notice – because of our short stay there; yet I remember it to be much after the fashion of that \other /which lyeth north east Weymouth.  Something higher [[fro]] but both of them halfe beaches, that is pebbles only the side next to the sea. whereas the Beach of Portland is a compleat sea banck of Pebles on both sides the width in length.

The Sea \which that makes upon the/ South West bay \breakes/ grows sometimes over in spring tides and vast waves, yet notwith standing  it doth \not/ soe much as soak-through: which if it did, it \but is a common event sence/ it were easly discernable since the bay on the other side North East is at such \times/ many fathomes lower than it

The Downs near Deal, Kent, the water between the town and the sands, does provide a naturally sheltered anchorage. The town thus became a significant shipping and military port, with transit of goods and people from ship to shore conducted using smaller tender craft.
Posted in Uncategorized | Leave a comment

Posted by Martin Lister on August 29

Lister later wrote on folio 17 of the Pocketbook,

In the Bay of Weymouth we were two Vessels bound over for France, on Saturday night the wind came up at North East. our Master set saile and we gained the halfe of our passage over \Garnsey/[1] over to St. Malos. The other master because he should saile on Sunday, staid behind in the Bay, & lost his passage for 3 weekes time.

[2] “Behold, I have had a grand affair with a woman without a tongue”–presumably with with his silent ship, the Dove.

Posted by Martin Lister on September 10

7ber 1  2. put out  thence Saturday 5 . put out \from Portland/2.  a second time Tuesday 10 8 and returned there Tuesday 8 and returne with great hazard of our lives 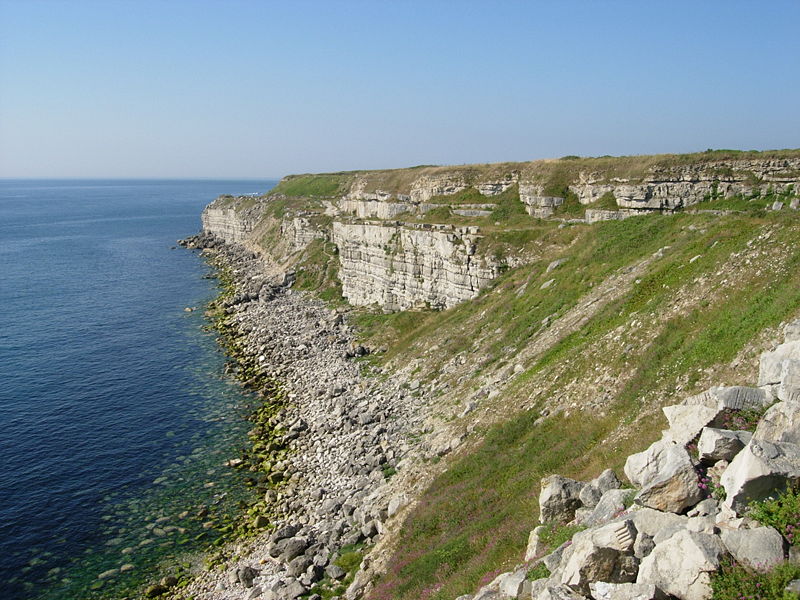 On folio 16 of the pocketbook, Lister later wrote:

I observe that upon thee Beech at Portland the sho noble stones were the largest upon the surface therof that towards the top of the Beech they were much larger, than those that were at the foot thereof.

That they became smooth and round, from the continuall washing it gives upon them likewise that there suddaine fall and rushing downe one upon the other (whence \partly/ heard too the horrible noise) addeth much thereto

Posted by Martin Lister on September 20

Aboard the Dove Frigat [1] bound to St. Malos

7ber 19th ride before Garnsey the 20 at night put out

a shoare at Garnsey the 21st

On Folio 18, Lister later noted:  They make cheise in Guernsey[2] (where they make much Cider[3] of the bitterest aple,[4]which they observe to make \the/ strongest and most taysting liquor.

[1] A frigate at this time denoted either a ship with a higher than usual keel to beam ratio or one with a good turn of speed and maneuverability.  Lister’s ship was named the Dove and was bound for St. Malo, France.
[2] Guernsey cattle are one of the most renowned dairy breeds. Farmhouse cheeses made from this milk were large, firm to hard Cheddars and Cheshire cheeses.  See John Fischer, Cheese: Identification, Classification, Utilization, Kitchen Pro Series, Culinary Institute of America (Delmar, New York: Cengage Learning, 2010), 70.
[3] With a strong Norman heritage, Guernsey was well known in the early modern period for its strong cider.
[4]There are several varieties of cider apple in the Channel Islands, including Barbarie Falla, Barbarie Rillie, Doux Masurier, Pommes de Romeril, Pommes de Normandie, Gros Doux de France, Pommes à sucre, Rouge Amerel and Blanc Amerel, Petit Doux, Sûr avoique, and the Loumet. Sûr referred to a sour or sharp apple. 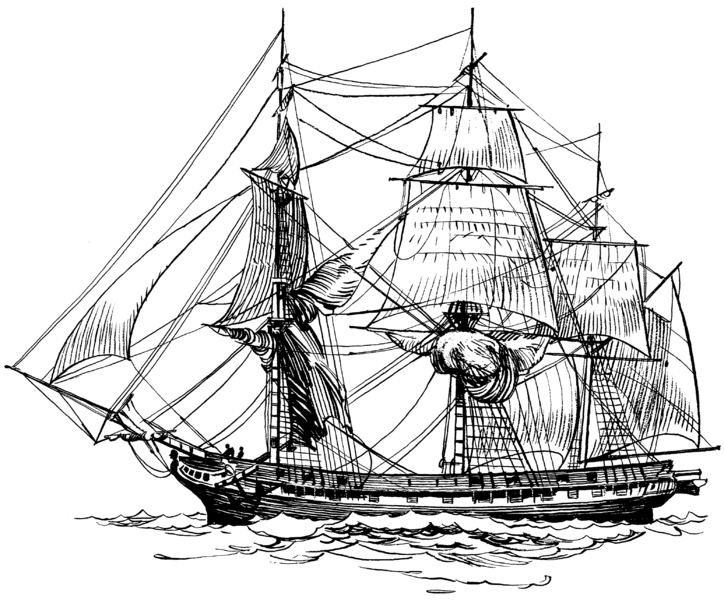 Posted by Martin Lister on October 4

8ber 1st put out of the shoare 3 in the morning. not able to weather Jersey came in \again/ by 8 of the clock in morning 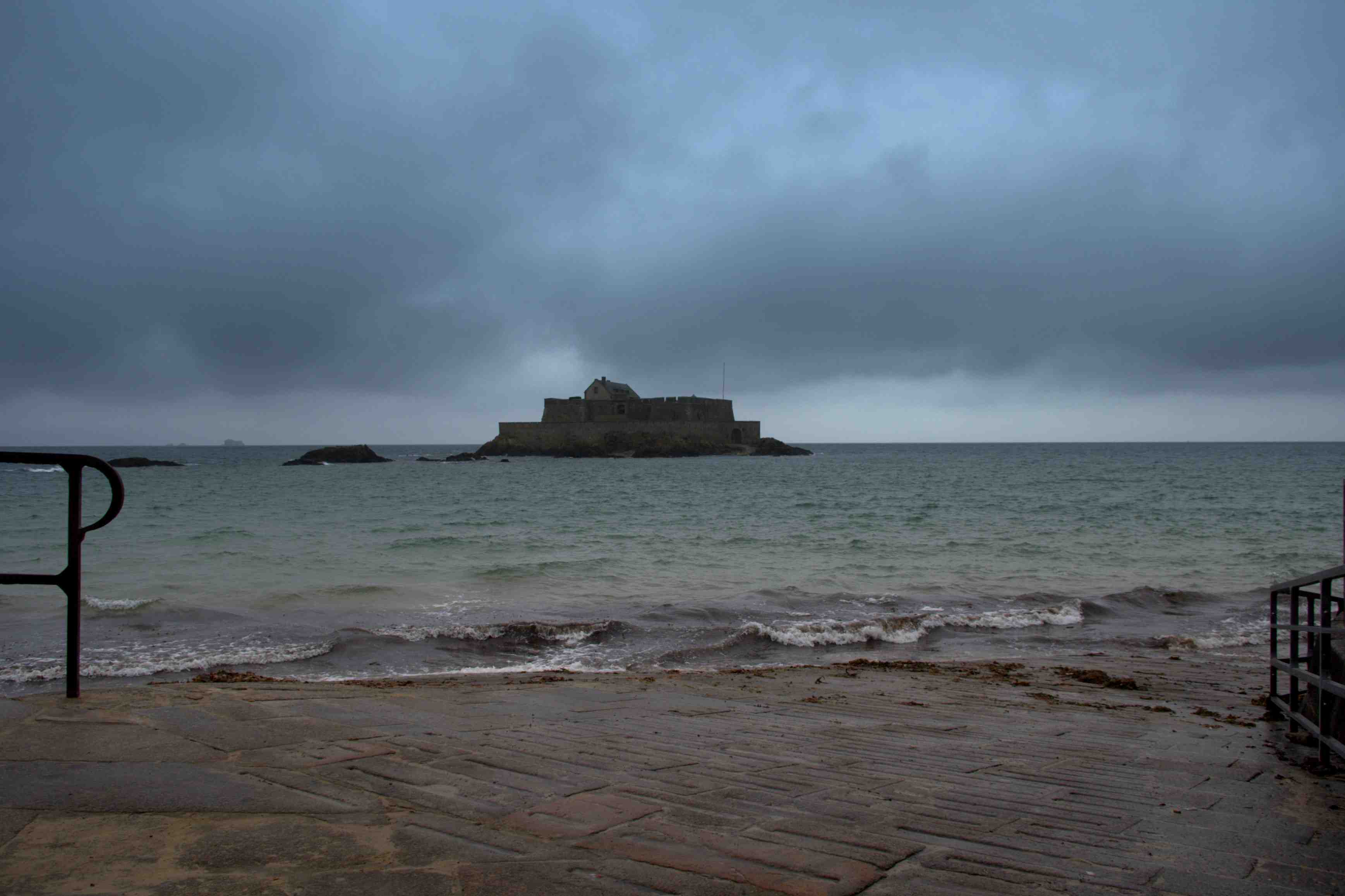 Posted by Martin Lister on October 6

[1] He then proceeded by “messenger” or by the postal coach to Rennes.  Distance was commonly measured in “leagues.”

On land, the league was most commonly defined as three miles (about 4.8 km), although the length of a “mile” could vary from place to place and at different times; a league could also be defined as the distance a person could walk in one hour. 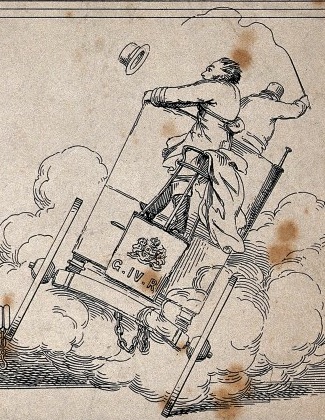