Martin Lister (1639–1712) was a prominent Fellow of the Royal Society who was made an honorary MD in 1684. A benefactor of the Ashmolean, he corresponded regularly on natural history with its keepers, Robert Plot and Edward Lhwyd. Furthermore, Lister was a prolific corresponding Fellow, and he issued a steady stream of letters from his medical practice in York, many of which were printed in the Philosophical Transactions.

Later in life he moved to London, where he acted as Vice-President of the Royal Society and also as Censor of the Royal College of Physicians. In 1697–78 he travelled abroad, and finally retired to Epsom, where he continued to transact voluminous correspondence. Lister was one of the most high-profile and well-connected naturalists of the age. 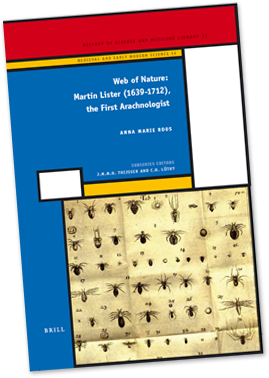 His unpublished papers were some of the largest of his donations to the Ashmolean and attest to his remarkably wide expertise, which ranged from Yorkshire antiquities and the origins of kidney stones to the disciplines of conchology (the study of shells) and arachnology (spiders), both of which he founded. In the nineteenth century, these collections passed from the Ashmolean to the Bodleian Library. They contain the bulk of his correspondence, although sizeable quantities of his outgoing letters are held elsewhere, chiefly in the archives of the Royal Society and the British Library‘s collection of Sloane Manuscripts. Those in the Bodleian illuminate, and are illuminated by, his many other scientific manuscripts, which include unpublished works, drafts, notes, and collections from other people’s papers, as well as his pocketbook from his visit to Montpellier. A full biography of Lister may be consulted here.