This was a general overview of the monarchy, nobility and offices of France, which went through several editions (56) from 1661 until 1752. It was a type of early modern “Who’s who.” 1

The publication was quite detailed, even listing all the personnel surrounding the awakened king at his Lever du Roy at Versailles and who later dressed him. The work also listed each article of the king’s clothing, and how

each piece of clothing was received from specifically indicated members of the two major services involved in dressing the King — the Bedchamber (Chambre) and the Wardrobe (Garderobe). For example, the First Valet of the Wardrobe (Premier Valet de Garderobe) gave the king his understockings; one of the Valets of the Bedchamber (valets de chambre) gave him his underdrawers, etc. 2

Why did Lister read this work, and why would it go to such detail?   L’Etat de la France was simply a reflection of the current power structure of the French kingdom and nobility.  Reading it would be important to a young English gentlemen such as Lister attempting to meet the great and good, advance his own career, as well as display his own political nous and perhaps even name-drop at a salon. 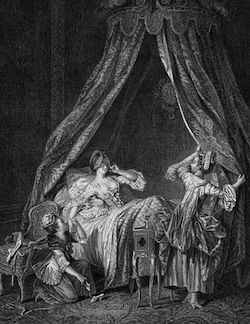 The book was also a reflection of Louis XIV’s political strategy.  As the work of Norbert Elias has shown, Louis XIV came to power in a time of great weakness, knowing from his experience of the rebellion of the Fronde that a purely authoritarian stance or a divide-and-conquer approach would not suffice.   Instead, the monarch succeeded to perfection in an ‘exact assessment of the power relationships at court and a careful balancing of the tensions within it’, thereby creating organizations and rituals such as the lever which both maintained ‘the tensions and differences’ and facilitated their supervision’. 3 An instrument Louis used in the exercise of his power was one ‘of regulation, consolidation and supervision’ of the ‘court and its etiquette as understood by the King’, such as the ceremony surrounding the Lever du Roy. 4