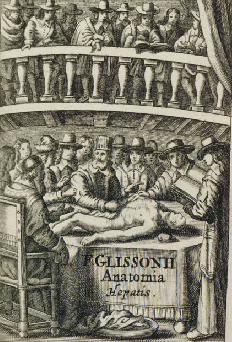 Lister recorded reading this work on 24 May 1664. In his book, Glisson used advanced methods in anatomical dissection, including casts and injection of colored fluids to delineate blood circulation in the liver.

Glisson also was a vitalist and an opponent of the Cartesian, materialist explanation of life.  As Greenblatt indicated,

In Glisson’s view, the fiber, although a theoretical concept, was a basic element of the animal body.  The uniqueness of his theory was that he incorporated the elemental fiber with the body’s vital force.  One of the most important properties of the fiber was irritability.  In his Anatomia hepatis, Glisson stated that the gall bladder and its ducts were able to secrete bile becauase of their irritability, which itself depended on nerve supply.  The bile irritated the passages and thus it was expelled. . . . Glisson’s doctrine of irritability received little acknowledgment and, in fact, lay dormant for about 70 years until it was resurrected by Albrecht von Haller. 1

Lister later donated a 1654 Latin edition of this work to Oxford.