Lister did not mention the Hôpital de La Charité in his memoirs or pocketbook, but his travelling companion Philip Skippon pithily described it:

La Charité is a fair hospital for men in Fauxbourg S. Germain.

Hôpital de La Charité was next to  l’Hotel Dieu, one of the most ancient hospitals in Europe, and it was situated in the Rue des Saints Pères in S. Germain.  La Charité was founded in 1606 by Marie de Medici for a religious community, the Frères de la Charité, who were surgeons or apothecaries.  As historian David Hickey stated, hospitals ‘directed by the Brothers of Charity were well ahead of most French institutions in their treatment of the sick’.  1

The Brothers provided training for pharmacists at the hospital, which also had ‘an enviable reputation for its surgical innovations’. 2  In the early eighteenth century, Louis XV’s personal surgeon Georges Mareschal (1658-1756), a surgeon at Hôpital de La Charité, persuaded the King to establish in 1724 a separate school of surgery in Paris: L’Ecole de Chirurgie. 3

There was some rivalry and competition between the Hôpital de La Charité and l’Hotel Dieu.  In the 1660s, the directors of l’Hotel Dieu accused the Brothers of la Charité of raising money for use outside France, turning ‘to the care of foreigners those sums which should be employed for the poor of this kingdom’.4 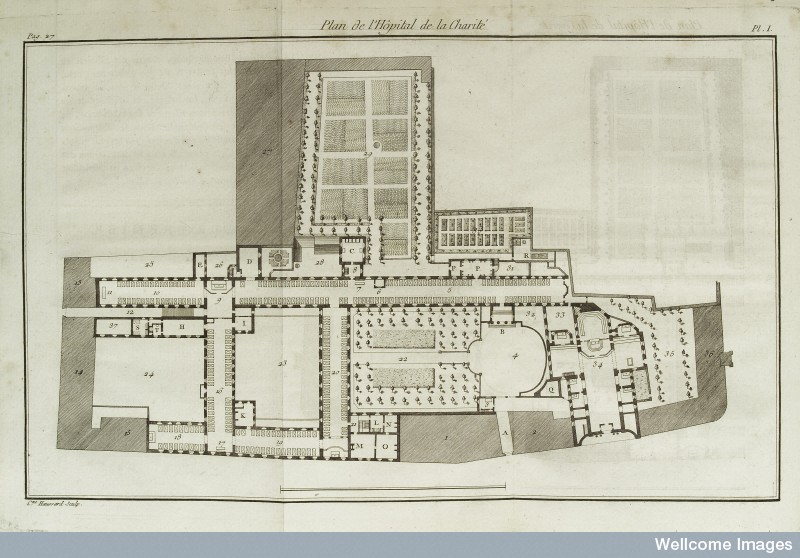