Theophrastus (c. 372-c. 287 BC), was a disciple of Aristotle and a polymath of Hellenistic Greek science, publishing works in ethics, logic, as well as botany.  His History of Plants and About the Reasons of Vegetable Growth gave him the reputation as the father of botany, forming the ‘base for all succeding studies of plant lore and classification until the Linnean system’. 1

In these works, Theophrasus described the origin of plants from seeds, pollination, and invented the terms ‘root’ and ‘shoot’ to invent plant growth.  He also classified plants and discussed more than 500 species in the Atlantic and Mediterranean, creating the largest encyclopedia of Mediterranean flora.

Theodorus Gaza (1400-1476) translated the manuscript from Greek to Latin (a digitized copy from the British Library may be accessed here), transmitting this work of Hellenistic science to western Europe.2  Theophrastus was often portrayed on the title pages of early modern herbals, such as that below of John Gerard (London, 1633). 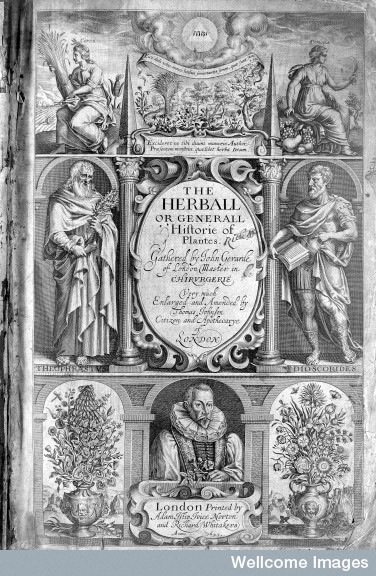 Book IX of the Historia Plantarum in particular was a rich source of medicinals derived from plants, which assimilated information from other sources such as the physician Diocles of Carystos, as well as drug-vendors and ‘root cutters’ or specimen gatherers. 3  Theophrastus also explained which season the medicinals were gathered and the relevant juices from the stalks; Lister himself would later do studies on plant ‘juices’ in his speculative papers about plant circulation published in the Philosophical Transactions.