Lister did not mention the Hôtel de Sully  in his memoirs or pocketbook, but his traveling companion Philip Skippon noted on 4 April 1666:

Noblemens houses are called Hostels, and over their gates are always written the names of them, as Hostel des Ambassadeurs near the Luxembourg; Hostel de Sully is in Rue S. Antoine; Hostel de Vendosme in Rue S. Honorè.

The Hôtel de Sully was designed by Jean Androuet Du Cerceau (1625-30), part of a dynasty of architects and decorators who influenced French architecture for a century. Eventually, the townhouse was sold to the Duc du Sully, the chief minister of Henri IV.  As architectural historian Andrew Ayers has indicated,

in its layout, the building follows the classic hôtel-particulier formula, with a shallow corps de logis giving into a garden at the rear and separated from the street by a courtyard, the latter surrounded on its other three sides by service buildings and accessed via a central porte-cochère.  One of the remarkable things about the Hôtel de Sully today its that it survives in more or less its original state . . .and thus gives an idea of what a grand 17C townhouse was really like. 1

In addition to the survival of most of its external and internal features (including the grand central staircase), the building’s facade decorations remain intact.  Their  elaborate friezes are characteristic of late Mannerism. 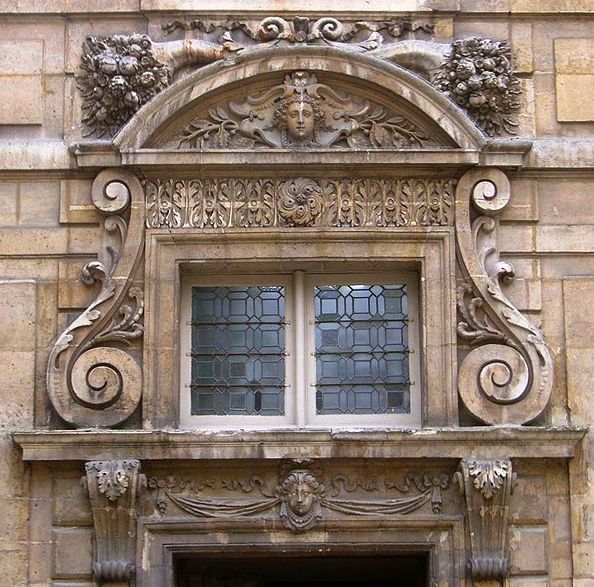