Lister did not mention the Mathurins in his memoirs or pocketbook, but his travelling companion Philip Skippon described it in some detail:

The Mathurins are the Padri di Rischatto, and are call’d in Paris because S. Mathurin’s body was formerly kept here, which is since carried to the place where he was born, called Archant, a village in Gastinois.  In the cloister here is a tomb-stone, with a sphere on it, and round about it this inscription:

Originally, St Mathurin was a hospital which in 1229 was given to the Brothers of the Holy Trinity (The Trinitarians) by Guillaume d’Auvergne, the Bishop of Paris.  As historian Olaf Pedersen has noted, in the following years, the chapel of St Mathurin became the headquarters of the University of Paris which had no buildings of its own, but which held its plenary congregations there and stored its documents in a chest in the chapel 1

A well-known mathematics teacher at the university, the astronomer Johannes de Sacrobosco (c. 1195-c. 1256) was buried in Saint-Mathurin, a ‘sphere’ or astronomical instrument decorating his grave. His tomb was visible to at least until the end of the eighteenth century when it was presumably destroyed during the French Revolution.   The last two lines of this epitaph are a memento mori of a usual type, the first two lines commemorating Sacrobosco’s fame as a computista, or expert on time-reckoning. 2  Sacrobosco was best known for his publication of Tractatus de Sphaera (On the Sphere of the World), an account of the Ptolemaic Universe.

The church only exists in ruins on 7 rue de Cluny, in the 5e arrondissement.  St Mathurin’s relics, as Skippon indicates, were moved to Église Saint-Mathurin in Place Du Pilori in Larchant, in the Île-De-France.  His cult was popular in the medieval era, his name invoked against infertility and mental illness.  The image below from the Wellcome Images Library shows his emblem, a possessed person at his feet. 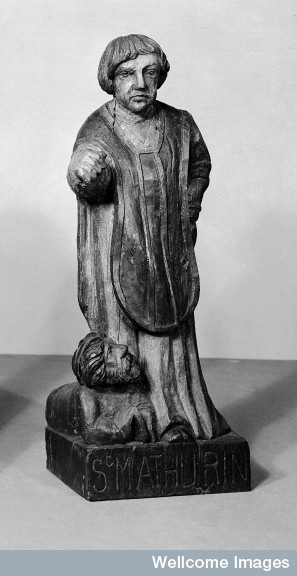