Lister read this work in April 1665, and it concerned recipes for safe cosmetics and enhancements for the complexion.

Moralists asserted that use of cosmetics was a mortal sin. Smith’s Wonder of Wonders (1660) stated that ‘these Dyes, Tinctures, and colours dawbed on womens faces, do signifie that the soul is sick within . . .as branded marks make known a Fugitive, so beautiful colours disclose a Harlot’. 1

English moralists such as Smith would use the trope of cosmetics as a means to engage in invective against the French as well.  In his treatise, Smith quoted one Dr Bulwer:

In the invention of black Patches the French shewed their wity pride, which could so cunningly turn Botches into Beauty, and make uglinesse handsome; yet in point of phantasticalnesse we may excuse that Nation, as having taken up the fashion rather for necessity then novelty, inasmuch as those French Pimples have need of a French Plaister 2 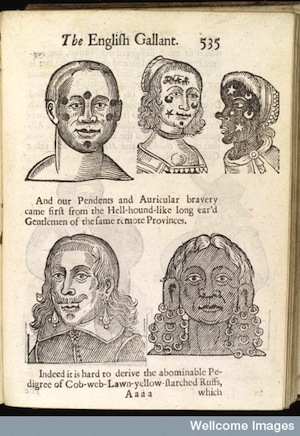 As stated by Phillippy, ‘the ideal woman of the anti-cosmetic polemicists is a woman of transparent surfaces—a ‘crystal glasse’, as the period’s mirrors for women frequently call her—whose colours are in agreement with her essence’. 3 Despite these moral strictures, use of cosmetics, patches, and skin enhancements was perennially popular.  As a physician, Lister would have to be familiar with their use.