Whilst in Montpellier, Lister met John Ray (1627-1705), the eminent naturalist and botanist, known as the father of English natural history. Ray’s classification of plants in his Methodus Plantarum Nova into monocotyledons and dicotyledons was a crucial step towards modern taxonomy. The son of a village blacksmith, Ray was sent to Trinity College, Cambridge at sixteen, whereupon he became a fellow, and lecturer in Greek (1651), mathematics (1653), and humanities (1655), praelector (1657), junior dean (1657), and college steward (1659 and 1660).

However, by the time he met Lister in Montpellier, Ray had resigned his fellowship at Cambridge, unable to subscribe to the Bartholomew Act of 1662. Instead he was serving as a travelling companion to his former pupil at Trinity College, the wealthy Francis Willughby (1635-72), who was undertaking his own Grand Tour (Willughby’s observations would later result in the first scientific work of ornithology, which organized species according to their physical characteristics, the Ornithologia libri tres [1676]).

Although Lister and Ray were at Cambridge at the same time, Ray serving as a fellow and tutor in Greek, Mathematics, and Humanities at Trinity College from 1649-62, there is no evidence that they met before Lister was in France. Ray previously had taken three different journeys throughout the greater part of Great Britain to botanize, two of them accompanied by Willughby and, in 1660, Ray published the result of their research in his Catalogue of English Plants (1677). Ray also published his own memoirs about his time in Montpellier with Lister and Willughby, part of his Travels through the Low countries: Germany, Italy and France (1673; 1738). 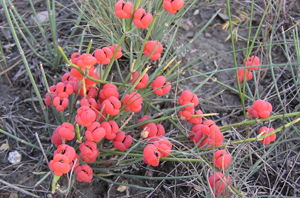 Ray and Lister became fast friends, going on several ‘simpling’ expeditions for flora in Montpellier and the shores of the étangs (lakes) around the city. They rode a short distance to Frontignan outside of Montpellier, where they dined and enjoyed the rich muscat wine of the region, and then rode along the beach between the Étang de Thau, a string of lakes or étangs that stretch along the Languedoc-Roussillon French coast. Here they found the Uva marina plant or Ephedra distachya; as the French called it, ‘raisin of the sea’. At the end of his travel memoirs, Ray even provided a detailed record of all the plants he had observed on his travels.

In his memoirs for December 1665, Lister recorded a series of conversations with Ray in who informed him he had not found any plant in England and Scotland that he could not find ‘elsewhere abroad, …soe that he knew not scarce any one plant which he could call properly English’.1  Lister noted that Ray did seem ‘pretty well satisfied concerning the Plants of Europe and that he beleeved he had seen the greatest share of them growing in their natural soiles and places of birth’.2

When Ray and Lister returned to England in 1666, they stayed in touch, engaging in an extensive correspondence comparing nature notes and discussing their relevant publications. Lister contributed his observations to Ray’s botanical works, and even served as Ray’s doctor in later life.